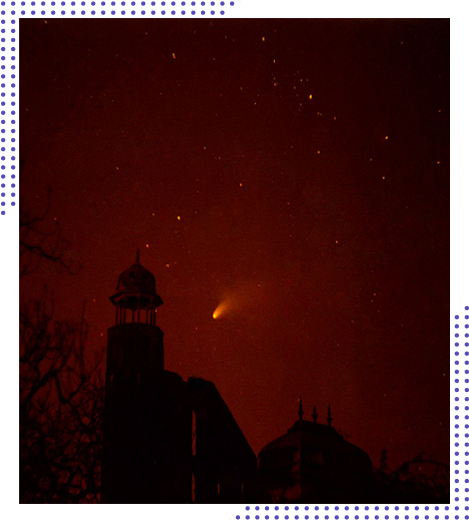 School groups with minimum 25 students are eligible for a little more than 41% rebate on entry fee. For a hassle free online booking experience, kindly initiate registration by clicking on the REGISTER button on the upper right hand corner of this page.

The brightness level of planetarium shows is appreciably low . It is advisable to occupy your seats well before the show time for a proper dark adaptation of your eyes.

Jupiter and Saturn, the two behemoths of the solar system, are putting up a spectacle these days in the evening sky. Both these planets are scheduled for a closest meet this evening at 11:51 pm. Astronomy enthusiasts, worldwide, are excited to watch and record the event with their instruments. It will be a wait of another twenty long years from now for a repeat event. The last time the two giants met was in the year 2000. Few enthusiasts are also webcasting the spectacle for an hour or so in the evening.

Experts at the planetarium are also keeping a watch on this celestial coincidence of a generation since last the few days. The attached photograph has been captured using an eleven inch telescope from its premises last evening at around 7:00 pm.

Jupiter and its fainter companion - Saturn, make its presence felt about quarter of an hour before six nearly 25 degrees above the south-western horizon. The spectacle concludes by quarter to eight as both the planets set down for the rest of the night.

Curious readers may have a look at both the planets locked in a Tango for the next couple of weeks as their separation gradually increases and both disappear in the glow of the setting sun carrying on with their celestial romance.

To keep track of our past, as well as present activities, please, visit our facebook page.